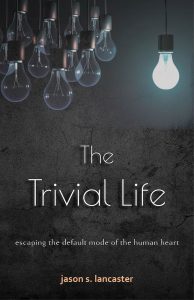 For the past twenty plus years I have been a pastor. For the past twenty plus years I have been in and out of counseling. Counselors love me because I’m the classic blame shifter who is easy to spot. “What brings you in today?” My wife has issues. “Why do you think you struggle with anxiety?” Because my seven kids are driving me crazy. “Why are you so filled with fear and anger?” Because my congregation keeps picking on me. It’s like I’m still a child in a grown man’s body. The problem is still out there and not inside of me. When will I learn?

Deep inside my regenerated heart, something is still off. Conversion doesn’t eliminate the battle and struggle with sin. The Bible uses terms such as “the flesh” (Galatians 5: 13) or “indwelling sin” (Romans 7: 17). There is an internal war going on within the believer between “the desires of the flesh” and “the desires of the Spirit” (Galatians 5: 16– 17). The “flesh” is the old “me-centered” sinful way of doing life. The “Spirit” is the new Christ-centered way of doing life. The war is real, and you can feel it on a daily basis: nagging fears, unhindered anger, unchecked desires, and ongoing relational turmoil. Even though your heart is no longer enslaved to sin, it still has a propensity to dabble in your old patterns of life. And if you fail to engage in the war, then your heart will keep defaulting toward triviality.

Your old self along with its passions and desires has been killed (Galatians 5: 24). This means that your old sinful way of living the trivial life no longer has to dominate you because your old self has been killed at the cross. Romans 6: 6, “. . . knowing this, that our old self was crucified with Him, in order that our body of sin might be done away with, so that we would no longer be slaves to sin” (NASB). Yet, your old dead self tries to live on and rule your life again.

This internal war is described in James 4: 1– 2: “What is the source of quarrels and conflicts among you? Is not the source your pleasures that wage war in your members? You lust and do not have; so you commit murder. You are envious and cannot obtain; so you fight and quarrel. You do not have because you do not ask” (NASB, italics mine). When we don’t get what we want, our flesh tends to strike. It’s not what we ultimately want but something warring within as Paul says in Romans 7: 22– 23: “For I joyfully concur with the law of God in the inner man, but I see a different law in the members of my body, waging war against the law of my mind and making me a prisoner of the law of sin which is in my members” (NASB). As believers, we truly want to live the weighty life, but the flesh is always trying to pull us back into the default mode of triviality. That is why we must diligently fight.

Some Christians act as if there is no struggle or war, as if it’s just a matter of positive thinking and claiming the victory. But not me. I feel like I’m in a battle on a daily basis. I once told my congregation that if they knew my twisted temptations, there would be a mob riot to run me out of town. And if we were all aware of their temptations, we would lock some of them up in the prayer room to cast out demons. But there is no need for mob riots or exorcisms as we are simply facing temptations that are common to humanity. The good news is that, in this battle, God always provides a way of escape. This should give us hope to stay in the battle in order to live in His victory.

Excerpted from The Trivial Life by Jason S. Lancaster